I posted a blog sometime back on why we need to prioritise retirement planning. Do you want to retire early? The landscape has now changed and it is very different as compared to our parents and previous generations. I had also laid down the steps on how we can plan for retirement.

Though the process for retirement planning is very simple, yet not many people get rich during their retirement years. In fact, a lot of people need to downgrade their lifestyle and lead a stressful financial life and not live the proverbial golden years of retirement. Let’s look at some of the reasons why this happens and what can be done to avoid it 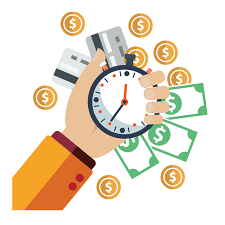 1. Lack of seriousness during working years

Living for the present without considering that there will be a time when the paycheck would stop but expenses would still need to be borne at a higher cost considering the inflation. There is a need of realisation that you can get a loan for everything else, be it a house, a vehicle, education, or marriage, but no bank would fund your retirement. Well, there is an option for that too about which I will mention later.

2. Not able to visualise retirement

This may be true for the younger generation – those in 30s and early 40s that they may not be able to visualise what retirement would look like. By the time, reality sets in, it could be too late already. Therefore, one concept which is catching up fast is not naming the goal as retirement, but calling it financial freedom. A lot of people want to get out of the race of working from 9 am to 5 pm (does it even exist now or is it round the clock availability!). So, an idea presented around financial freedom gets accepted. As long as the investment is being done to reap the future benefits, in my view, it is all fine. Once that stage is reached, where you are not working for money, but for the love of working itself, the feeling is indeed awesome.

As parents, we want to provide the best for our children, whether it is experiences, holidays, education, or anything else. As lives get busier with work pressure and other stress, it the time spent with the children which gets neglected. The guilt then takes over which unconsciously a lot of parents try to make it up by substituting it with money. No sooner is the demand to buy something from the child, it is there in the house already! Then there is a horde to provide the best of education (which also gets compared and confused with the most expensive ones). This eats into money that should have been saved for retirement. Similarly, other expenses like lavish holidays and marriages add up to it.

4. Not focussing on increasing the income

Getting satisfied with our earnings and not want to earn more by going out of our comfort zone. The prime working years soon get over when the skill set is in demand. If not leveraged on time properly, it can be too late as doing catch-up on retirement planning is very difficult.

5. Not taking the power of compounding to advantage

We all know about the power of compounding being talked about as the eighth wonder of the World. 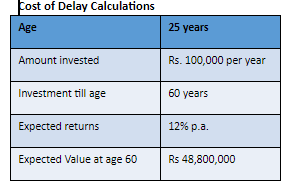 6. Unable to save money

Procrastination sets in where we start rationalising with ourselves. Whatever money is left after expenses will be saved for investments. We end up over-spending and then postpone this thought for the next month, and the next, and the next …… Why not first pay ourselves at the beginning of the month, 10% or whatever we are comfortable with, invest that money and only utilise the balance remaining for our regular expenses. Humans are known to be excellent adapters to change and I am sure, this would get into the routine, sooner than we anticipate. A blog written previously, paycheck to paycheck gets into more details on this topic. 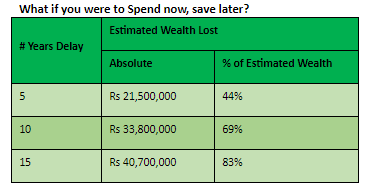 8. Too safe while investing

We can only retire comfortably only and only if our investments beat inflation, else whatever is invested can slowly be eaten away by inflation, leaving no money or less money for retirement. I do believe that taking no risk at all can be the biggest risk in investing. The longer time frame available for retirement, the higher can be the risk-taking appetite. But then, taking more risk than what we can absorb is also not advisable especially if it starts giving sleepless nights. It may not be worth it.

I mentioned previously about the power of compounding. If the realization of retirement comes up much later, when in the 50’s, then it could be too late and the catching up may not just be possible. It is then the time to start accepting the reality and scaling down on the goals during retirement and making changes to the lifestyle. Accepting the fact that, “I was late to realise that I was very late”.

10. Depending on loans and credit throughout the career

This is a very common reason for people not able to achieve their retirement planning goals. To keep up with neighbours and relatives on showing off or keeping up to pace with them, we end up going beyond our means. The affordability of buying a house could be a 2 BHK flat, but we end up buying a lavish villa. The easier availability of loans makes it even easier for us. What then happens is that we spend the best years actually “working for the bank” by paying their EMIs. Due to so many EMIs running – whether it is the home loan, vehicle loan, educational loan, or any such types, no money remains for investing. Just getting by the entire month becomes a struggle, especially during the end when there is an eager wait for the salary to be credited. This should be the time to be investing (rather than paying EMIs) and taking the compounding to our advantage.

One reason for not planning retirement properly is due to the belief that children will take care of them in their old age. The fact that so much of money has been invested in their education, marriage, getting them settled, and now it would be their moral duty to take care of parents. With the advent of nuclear families, there should be a shift in this thought process. There would still be families where this would continue to happen, so don’t get me wrong. But then why have this dependence? Why not be self-reliant? That will be the greatest gift to our children if we are not dependent on them financially.

What can be done for retirement planning?

The good news is that you still have cash flow coming and the financial situation can be put into order. How much of it can be done depends on various factors such as your age, your goals, aspirations, etc. It is important to set up goal-based planning, with retirement being one of the topmost goals and then work towards it. If you have the knowledge, time, and dedication to do it diligently, then you can do it yourself. Else please get professional advice by getting in touch with a financial advisor or a financial planner.

If you are retired, or are very close to retirement and have the realisation that there is not much money in the kitty which would last, well the options are very limited. The risk-taking ability is also very low and it is important to take a very cautious approach. One option which you do have if you have a house of your own is the Reverse Mortgage. You can read more information about it in the blog I had written earlier.

Wishing you all the Best. If you would like to set up a conversation with me on your financial planning, then please do contact us. You can also read various other blogs on the topic of personal finance on my website. You can also subscribe to my youtube channel wherein I am uploading a weekly video on any such topic of interest.